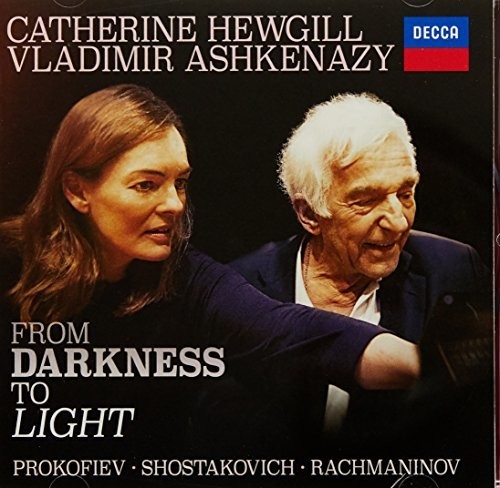 On two days in October 2016, Russian pianist and conductor Vladimir Ashkenazy and Australian cellist Catherine Hewgill went into the studio to make their first recording together. An all-Russian program, it features the Cello Sonatas of Shostakovich and Prokofiev with the added pendant of the Rachmaninov Vocalise in an arrangement by American cellist Leonard Rose. This is their first recording for Decca (Australia). The recording, entitled From Darkness to Light, 'reflects the many very dark passages in each of the two sonatas, which ultimately seem to resolve themselves into the possibility of universal light and hope,' says Ms. Hewgill, Principal Cellist of the Sydney Symphony Orchestra. 'I very much enjoyed working on this recording with Katie Hewgill. She is a very artistic and highly professional musician. Also, as I am Russian, it certainly feels very natural to me to identify with this great music,' says Vladimir Ashkenazy. Prokofiev's Cello Sonata sees the composer on his very best behavior. The astringent harmonies, the motoric rhythms, and the sardonic, sarcastic and pessimistic temperaments that characterized so much of his earlier music have been replaced with a more palatable lyricism, and an apparent willingness to please, instead of provoking. Shostakovich's Cello Sonata was written in the wake of a spell of notoriety. It was written in 1934, the same year as the premiere of his 'shocking' opera Lady MacBeth of the Mtsensk District and was completed on 19 September that year, a week before he turned 28 and was his first important chamber work.